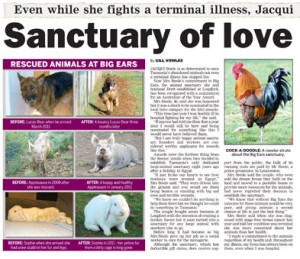 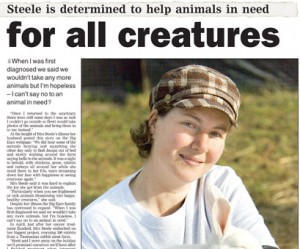 Big Ears Sanctuary, Freedom for Farmed Rabbits & Radical Rabbit have formed a partnership to help and rescue 300 ex-meat rabbits in Tasmania. With support from members, Big Ears Animal Sanctuary have been able to purchase the farm, including the 300 rabbits and all equipment used in this cruel operation.

On the 31st March 2012, Big Ears Sanctuary welcomed their new residents, after living a cruel life of misery and confinement.

“Rabbits suffer immensely in these factory farms through injury and disease. The rabbit farming industry has a 40% mortality rate, higher than any other agriculture industry.
The conditions of these rescued rabbit reflect this. These majority of these rabbits will live with a life time of illness from being exploited in one of Australia’s cruelest, yet growing industries.” Says Freedom For Farmed Rabbits Spokesperson Hayley Budrius.

“After working with rabbits for years, the closing of this Rabbit Factory Farm further shows that this cruel industry is not financially viable in Australia and simply cannot cater to the welfare of these intelligent,. companion animals.” Says Karen of Radical Rabbit.

President of Big Ears Animal Sanctuary Jacqui Steele says “I am honoured to have these rabbits in my care, it has been fantastic to see these animals maintain their wild instincts by seeing them hopping, digging and eating fresh grass, all of which they are deprived of in a factory farm”

The current condition of many of the rabbits is promising and they will be offered up for adoption in the future-after they have all been desexed. All groups involved stand strong on the fact that the intensive factory farming of rabbits should be banned in Australia.