Big Ears is home to 13 pigs, all rescued from various situations.

In 2007 we were contacted through a friend about a 6month old male pig that was about to be slaughtered. The pig had been the runt of his litter having been born at an intensive pig farm. He failed to gain weight quickly enough so was left to watch all his siblings taken away from him – never to return. He was mistreated and neglected until rescued and journeyed to the sanctuary on the back of a ute.

We named him Rhubarb and when he arrived he was scared of people and would hide under the chook shed. It didn’t take long until he grew to trust us and now he is always the first pig to greet us and offer his belly for a rub. He has the most amazing array of grunts and snorts signalling to the other pigs and humans alike. He has the most human eyes of any animal at the sanctuary.

His eye teeth had been cut and his tail docked all without anaeshetic when he was only weeks old as is done to all piglets at intensive piggeries. Because the pigs are kept so confined their stress and boredom lead them to chomp on each others tails. This does not happen when pigs free range.

In Australia 95% of pork comes from intensive piggeries where sows live in metal barred stalls allowing them room enough to stand and lie down. They develop pressure sores on their bodies from lying on rough concrete surfaces and are regularly injected with anti-biotics as the conditions in which they live are unhygenic and the pigs are prone to infections that develop into large abscesses.

Later that year we also took in Clarence, a four and a half year old pig. He had been purchased as a miniature but had been over fed and was the fattest pig we (and our vet) had ever seen. He had been a pet and was being killed with kindness and was fed foods not normally found in a pig’s diet.

It took 12 months but we finally managed to slim Clarence down to a reasonable size. Because of his diet and weight issues he has had problems with his legs. Some weeks Clarence would be injected every night and he came to be very wary of anything that looked like a syringe. He is the sweetest pig and for his size is the most gentle of creatures and is able to communicate effectively with us so we can meet all his needs – like an extra blanket when it’s cold at night.
Look at him now, he is slim and he runs around with his friend Trixie. Clarence has so much personality he is a joy to spend time with. Clarence always has to have the last word (or grunt). 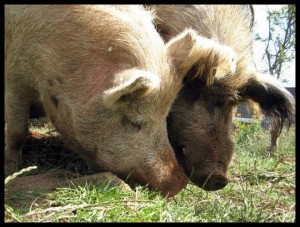 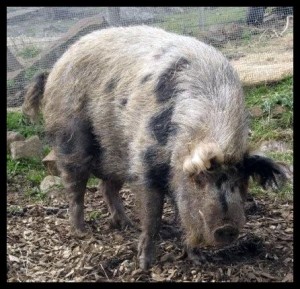 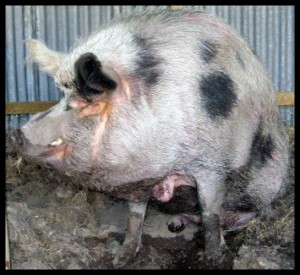 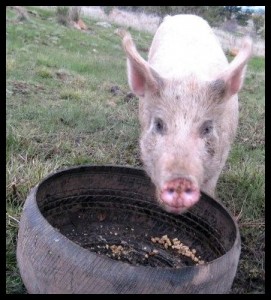 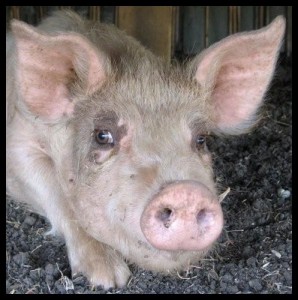 Winkerbean and Applesauce joined the pig family. They were rescued from an animal hoarder by Emma from Brightside. They now call Big Ears home.
Briefy, animal hoarding is characterized by a failure to provide the animals with a basic standard of care, space, sanitation, nutrition and veterinary care. Animal hoarding is further compounded as the person often does not recognize that by failing to do this, the welfare of the animals is at risk. The person will often continue to accumulate animals despite being told they are not doing the right thing for the animals. Please if you are aware of a situation like this report it to the authorities, both the animals and the person need intervention. Many factors contribute to animal hoarding, including the inaction of community members in notifying the authorities when they see a situation that is detrimental to the animals. 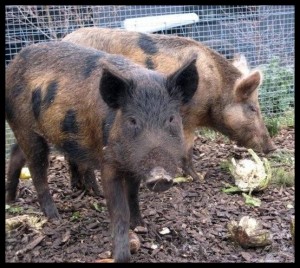 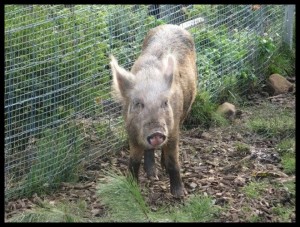 Miggles is a young male pig that had been living in suburbia. Miggles came to Big Ears because the land he had lived on was subdivided and there was no longer any room for him. He is a beautiful friendly boy and a welcome addition. 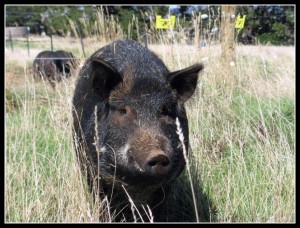 This is Frankie found as a baby on the side of a road. He will grow to be a large pig that would have been slaughtered for his meat. Pigs are very intelligent animals, some studies have shown they are smarter than dogs and 3 year old humans. 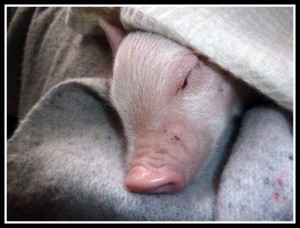