Big Ears first came into contact with the wonderful world of hens after deciding to rescue some “spent hens” from a now closed and infamous factory farm south of Hobart. This was our first experience inside a factory farm shed and it was horrific. The noise, and smell were overwhelming. After becoming accustomed to the dark shed, the particles in the air which made breathing difficult, the sight of all those birds craning their necks out of their small cages was heartbreaking. The cages were about the size of two A4 pieces of paper and had 4 to 5 hens in each cage. The hens were nearly featherless, were bony and pale looking. Their combs were a sickening light pasty colour instead of the usual vibrant red colour of a healthy bird.

We chose the first hens we saw and the woman with us scruffed them roughly out of the cage and shoved them in the boxes we had. We told her that they would have a good life with us with which she responded “anywhere would be better than here”. As we were about to leave there was one hen frantically poking her head out of the cage to get our attention. She made eye contact with us and we asked the woman to put her in the box as well. We called her Lucky.

When we arrived at our house we eagerly took the hens to their new hen house and enclosure. We had lots of food, silverbeet and pellets for them. We opened the boxes and waited. At first no one ventured out, and we eventually had to coax them out. The girls ran straight under their house and didn’t emerge for a few hours. The girls started to emerge and look around. The first thing they did was drop down to the ground and spread their wings out in the sun. It was an amazing sight. Next they started to flap their wings in the dirt. They were dust bathing to remove all the parasites that were on them

When we offered the girls some silverbeet and other greens they stared at us not knowing what to do. It took a number of days before one curious girl decided to try a green leaf and the rest followed suit devouring the lot
Their first night in the hen house was an eye opener. Some of the hens used the roosts but most all piled on top of each other in a corner replicating their lives in the cages. It took several weeks for some of the hens to stop doing this and to climb up on the perches. They were unable to fly up because they had no feathers so we made sure they could climb up
All of these hen girls have now passed away. The ravages of a life in a factory farm led them to have many health issues.
One of the strongest memories of these hens was their ability to forgive the harm done to them. The girls were all very inquisitive and became friendly enough that they would run to greet us and would often hop up and sit on our laps. One of the hens we named Wimpy to follow me all over the farm. She became sick with egg yolk peritonitis and despite a number of trips to the vet she was unable to be saved.
Since those first hens Big Ears has taken in 2 more groups of battery hens and many other hens from other circumstances.

Roosters are the unwanted by-product of the chicken meat and egg industry. When chicks are days old they are sexed and the males are thrown into plastic garbage bags and thrown in the bin or they are ground up alive for garden fertiliser. This heinous treatment of these beautiful creatures is another reason to abstain from eating eggs or chicken products.

2011 Big Ears is home to roughly 60 roosters, most of whom have come to us after being dumped or no longer wanted in suburbia. The roosters all get along well and live with approximately 100 hens and free range over the Sanctuary. 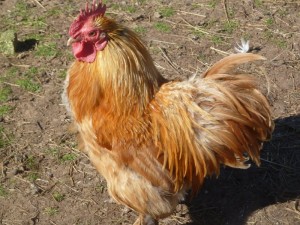 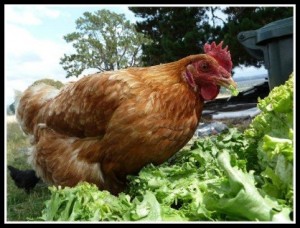 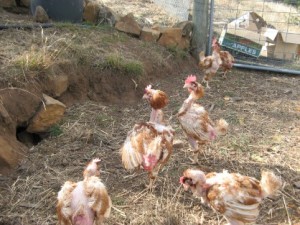 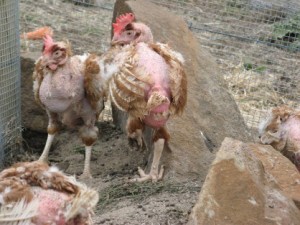 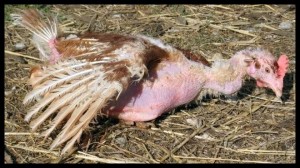 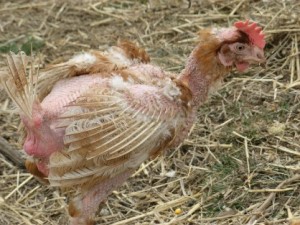