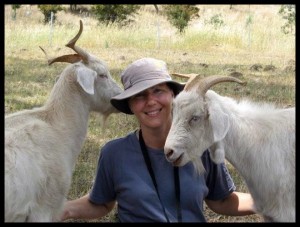 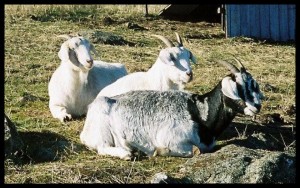 The first 3 goats to arrive were give aways in the newspaper. They are Mummy goat, Mimi and Bessie. Mummy is literally the mother of the other two. Mummy and Mimi look very similar and are very close. Bessie is a bit of a black goat of the family as she is black, grey and white. Mummy is very strong, confident and in charge. She likes to use her horns to her best advantage. Bessie likes a cuddle but she prefers to lead the others into all sorts of adventures, she is the most inquisitive. Mimi passed away.

Buffy was a rescue facilitated through the RSPCA. She had been used as a “lawn mower” on a suburban building block and had been tied up (tethered) for 2 years of her life. She had sores on her neck from where the collar had worked itself into her skin and neighbourhood kids used her for target practice. Buffy had a tough time at first as she hadn’t seen goats before and they weren’t overly accepting of her. However she stuck with it and is now a member of the herd. She is not keen on people at all but will come to Jacqui for a pat when she feels it is safe enough to do so.

Bert and Ernie joined the sanctuary in 2007. They are 2 beautiful cashmere goats that had been rescued by two very caring people when they found them dumped in a box by the roadside. These caring people hand raised them until two years of age but unfortunatley they needed to move interstate due to work so Bert and Ernie came to Big Ears.

Sandy arrived at the Sanctuary after he continually escaped from his previous placement.

Opie also came to the Sanctuary because she would escape her suburban block with her sheep friend Wilbur and end up in traffic.

Romeo and Juliet pretty much turned up one day and never left.

Billy-Bob is about 10 years of age and came from a large suburban block where he and his mother had been sold as part of the chattels of the property. Billy-Bob spent his life tied up because he was an escape artist and liked to wander around. Billy-Bob is now free to roam with his goat friends.