Big Ears is home to 5 donkeys.

Kelly came to the sanctuary through a local rescue organisation. She is approximately 30 plus years (the dentist thinks late 30s given the state of her teeth). She is a white grey colour and is very affectionate. She seeks out pats and cuddles more so than the other donkeys and is definitely on top of the donkey hierarchy. Kelly has been mistreated at some point possibly with the use of a twitch, she is very reluctant to have her head touched and does not like her ears being touched. 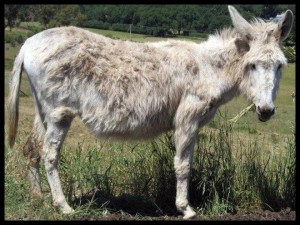 Pedro was also facilitated through a local rescue. He is a large donkey and is very affectionate. His elderly owner was unable to continue to care for him due to her failing health and she had also inherited him when she purchased the property. Pedro has been mistreated especially in relation to having his feet trimmed.

This is unfortunately very common for donkeys and horses because they live for such a long time. A donkey can live for up to forty years. We encourage owners of these animals to think ahead and make provisions for when they are no longer able to care for them. 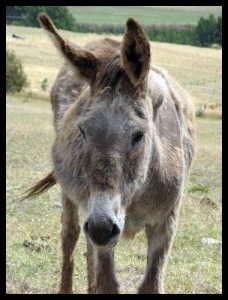