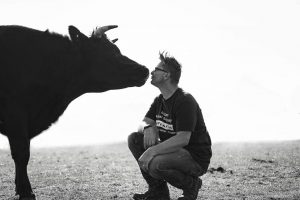 Big Ears is currently home to 5 cows. These big beautiful creatures have been rescued from different situations and are the ambassadors for their kind. We miss the cows that have gone before them including those below Milton, Roxie, Blossom and Nelly. 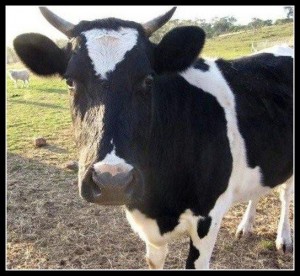 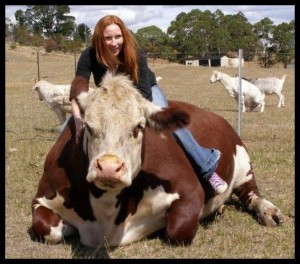 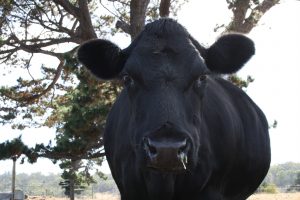 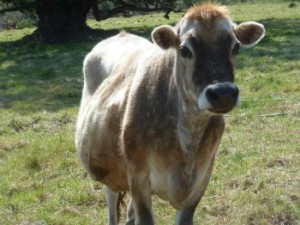 Roddy is simply magnificent and breathtaking.  Many cars stop as they drive up our driveway to take a look at this magnificent boy. He is approximately 8 to 10 years old and is a Scottish Highland Steer. It was a hair raising experience getting Roddie to Big Ears as we had to get him him into the livestock trailer and then drive a considerable distance back to the Sanctuary. On the way Roddie started rearing up in the trailer and we thought he was going to jump out as we drove through the main street of Launceston. Roddy was lonely at his old home and would easily escape all fencing and roam around the town. Bovines are prey animals and live in a herd for protection. As Roddie had no herd he could never fully relax and was scared and lonely. When we went to capture him it was evident from his eyes and facial expression that he was afraid of everything. We eventually succeeded in getting him home and it was amazing to see him transform almost immediately from an afraid steer to a curious and playful boy when he met his new herd. Of course all our girls made him welcome and little Jasper was only a youngster and didn’t feel threatened by him.

Roddy remains slightly aloof but is learning to trust people more and more allowing some to hand feed him.

Katie (jersey x) came to live with us after we were checking animals on a nearby property for the owners as they were in the middle of moving. The owners had tried to find new homes for the cows but during their absence Katie got herself into a fenced in area that had no grass or water. Although able to get herself in – she couldn’t get herself out. When we found her she was emaciated, and hoarse from mooing for help. She would only have lived a day or two more at the most. Roxy her fresian friend had tried to help her but there was little she could do. Katie’s manure was the size of sheep poo.

We contacted the owners and started a feeding and re-hydration regime that Katie immediately embraced. And we embraced her. We fell in love with these 2 cows whose friendship is so strong and loving and the owners agreed they could move to the sanctuary. Katie hasn’t looked back. She is still an escape artist and gets into other paddocks at the sanctuary and we often find her up at the garage looking for a snack.

The cattle meat industry is one of the most harmful to the environment, people and to the animal. These beautiful, thoughtful and inquisitive creatures are sent to their deaths scared and terrorised. Any doubt you may have about the cruelty of slaughterhouses will be dispelled once you have read “Slaughterhouse”. Before the brutal death, cows are ever increasingly being raised on feedlots, fed a diet that is unnatural to them and fed antibiotics to help them deal with the stress of mass confinement and living on dirt and mud. Nelly our beautiful cow, was transported on a cattle truck that stopped over at a feedlot. When she arrived at the sanctuary she was very unwell as she had contracted a respiratory illness from being at the feedlot in the back of the cattle truck.

Katie was bred for the dairy industry. If there she would be milked and kept in calf with their newborns taken away at a day or two of age. It has been shown that cows have grieved for their young for up to 6 months. In relation to being milked, cows are over milked and made to produce more than they have previously.

Lorry arrived at the Sanctuary in May 2017. He was originally found on the side of the road as a baby after either falling off or jumping off a livestock truck on his way to the Cressy slaughterhouse. His rescuer hand reared him for 2 years where she taught him to walk on a halter and come to his name. Lorry was provided with all he needed and more, except for the one thing his rescuer couldn’t provide – same species companionship. That’s why he now has a forever home at Big Ears.

Jasper arrived on Jacqui’s birthday as a 3 day old male calf from a dairy farm. Male calves are excess to the needs of the dairy industry and thus he had been removed from his mothers milk and put in a shed with the other young ‘Bobby’ calves all crying for their mum’s. They get very sick as they don’t get colostrum (first milk) containing much needed anti-bodies and high in nutritional value.Instead they are fed weak powdered milk as they only have to be kept alive for 4 days until they are sent to the slaughterhouse. They are used as veal, for some medical products, their hide is used for leather and the rest used for blood and bone. The local slaughterhouse in Longford kills approx. 3000 of these calves a week in birthing season.

Bascially the calves are born, taken from mum, end up sick and scared and then slaughtered all in a week – what a horrible short existence that is.

Jasper was one of the lucky ones who has come to live at Big Ears to be an ambassador for all the calves that we don’t see. They can’t speak out with their beautiful eyes to ask you to please consider giving up dairy or at least cutting down. By doing this you are removing demand for the product which means fewer calves will have to die. You make think your action is so small, how will it help? Well it all helps, just think if everyone did it the industry would be killing fewer and fewer of these beautiful boys.

Jasper found a ‘mother’ at Big Ears with an old dairy cow we had named Blossom. She was 23 years old and she had given birth to approx. 12 calves in her past dairy days. She fell in love as soon as she saw Jasper and she let him suckle on her udders which resulted in her coming into milk. They developed a mother/child bond.

Rosie came to the Sanctuary in 2015 after being rescued from the dairy industry.  Her friend recently died and with little feed remaining in her paddock, her humans approached Big Ears to take her in.  We said yes and she arrived and has fit in with her new herd  really well.  She loves all the green grass, a good scratch under her chin and her new bestie Jasper the calf. 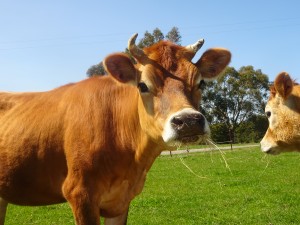